Redbirdfan06 said:
Up one, with the ball, and under a minute, mcchesney misses a wide open 3. Make that and it’s a two possession game. I know Lewis had the two turnovers on the next two possessions but that wide open missed 3 hurt.
Click to expand...

Whatever momentum and excitement was built up in the offseason took a major hit last night. All the harder to bring back the non die hard fans. Need to figure a way to win the next 3, 2 on the road never easy no matter the opponent. Fair or unfair the casual fan looks at last night and says same old same ol

Phantom said:
Glad someone else saw that. I tweeted about it right after it happened. It was only on the screen for a second or two, someone on the production crew must've had an "oh shit" moment and cleared the screen.

Sound & cameras were screwy too. It's just like football games. I don't know if it's Marquee or Learfield or a student crew doing the production but our broadcasts always look & sound like HS game film from 30 years ago. It's great to have games televised of course, but none of them ever look right.
Click to expand... 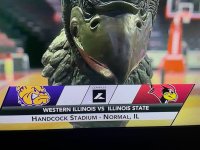 He missed all his shots.
R

Doesn't get anymore small time than that!
S

I could post 20 facts about what we could have done better to win that game, but this game means very little in the big picture. We have over 100 days to get ready for Saint Louis. It will be years for us to be known as a good program again. I am pleased that I think we are going to see consistencies in expectations where players can be interchangeable. It looks like there are expectations to a) not get beat in transition, b) to block out and rebound the ball, c) to take care of the ball on offense (which we failed, but oh well). No shortcuts to success.
A

Disappointing loss for reasons that most have already pointed out. I think one thing worth mentioning a little deeper was that it was Pedon's first game (outside of the exhibition) with complete control. 100% of the decisions were his for the first time in his 20+ year coaching career. Time outs, subbing, working the refs, is all new to him.

I noticed a bit in the exhibition game that he doesn't seem to have a good flow of when to/not to sub. Lewis played all but 4 minutes, which was needed. Liam didn't produce and played 22. I know Pedon is high on Liam, which I too see a ton of potential but it's a tough balance. Do you pull him and completely destroy his confidence, or do you let him work it out his timing in-game, understanding that he hasn't practiced much due to injury? I'll probably go back and watch a replay to confirm, but it felt like the offense flowed better with Joe P in the game. He had 8 points, 6 boards, a block, and an assist in 17 minutes.

Malachi's injury appeared to be a cramp. I'm wondering if that's a chronic thing he deals with. I saw him chugging Gatorade during free throws while he was on the court. Glad it's nothing serious.

In the first half, while both teams were trying to score, it felt like every guy on the court for ISU wanted to be THE GUY to get them out of the rut. The team is very clearly trying to learn their roles. Burford made that half court shot buzzer beater to go into half but then passed up the potential game winner. It didn't feel like Kendall was expecting to take the last shot.

The guys have played two very physical games to this point. I think that surprised them a bit. Gotta play through it.

One of the biggest off-the-court disappointments were the students across from the BRMM. The first row or two were up and engaged and I saw them pleading with those behind them to get up and be active in the game. I actually saw one of them explaining to some sitting behind them WHY they were standing. The requests were met with eyerolls and shoulder shrugs. They didn't get up until the final minute. I'm glad the BRMM was there to keep energy high. I just think back to when I was in school....if you would've told me there was a basketball game on a Monday night, no class the next day and the area sells beer...it would've been a great time down there.

Use these games to get ready for Conference. Beat EIU.
B

It wasn't he missed the shot for me... but is he the one you want shooting it? He shot 30 percent last year from there- and 0-3 yesterday. There had to be a better shot.

Not reading all through this and not worried. I think Pedon took an approach to learn about the team and rotations much more than pressing to solely win. I don’t think he wanted to lose I just don’t think he coached like it was do or die.

This was a game where a lot of guys looked to be feeling each other and waiting for someone to step up. Not entirely unexpected with a predominantly new roster. Lewis was fantastic and I don’t fault him for the end. He was put in a rough position and tried to do too much. Saw some great things out of Poindexter until he started cramping up. It happens this early. Kasubke looked strong defensively and provided some lift on offense.

We rebounded far better than last year. Defense was better than we’ve seen under the last 4 years of Muller. WIU just made some tough 3s and shots to hang around. The whole team was off. Missed a ton of shots that were in and out or close. Not sure if it was nerves or what. Despite the loss I am encouraged by a lot of what we’ve seen. This week might be painful, but I expect the staff and players to learn who they are and grow quickly.
W

I was at the game and admittedly thought that ISU would win easily. Agree with all above observations. No strength inside other than Lewis. Disappointed that Rosner was left open for his final 3. Hoping for 16-17 wins but if we can’t beat WIU on our win court..........
S

I noticed Western Illinois last year began the season 10 and 2. Their 2 losses were 84 to 80 against DePaul and Eastern Michigan 72 to 68. They had wins over Big Ten Nebraska, Miami (Oh), Ball State, Central Michigan and Northern Kentucky (who won over 20 games each of their last 5 full seasons). After that 10-2 start, they went 6-14 the rest of the way to finish .500. Go figure.
R

I never said players shouldn’t miss shots. I said that play hurt. Never said it cost them the game or throw mcchesney under the bus.

ISU missed their open 3 that would have made it a 2 possession game with under a minute. Western comes down and makes their open 3 and takes the lead for good.
P

Phantom said:
Was plenty disappointed watching that one. After sleeping on it, a few random thoughts:

It's one game. It's the first game of a brand new regime and new roster, etc. Fine. Okay. But that excuse ends there.

- Looked better during the times we tried some tempo instead of standing around
- We have some athletes...when they play under control
- Did a good job getting to the FT line
- Some semblance of atmosphere in the arena, albeit not a ton to cheer about

We'll see how much of that can be fixed before facing the mighty Panthers in Chucktown on Thursday.
Click to expand...

His left leg cramped during a midrange shot is all. If we just and some cutting to the goal one problem would be solved.

Popsto4 said:
His left leg cramped during a midrange shot is all. If we just and some cutting to the goal one problem would be solved.
Click to expand...

Glad to hear it confirmed to be minor. Really was impressed by his play. That little half euro step that rimmed out would’ve been a thing of beauty.
G

stats said:
I noticed Western Illinois last year began the season 10 and 2. Their 2 losses were 84 to 80 against DePaul and Eastern Michigan 72 to 68. They had wins over Big Ten Nebraska, Miami (Oh), Ball State, Central Michigan and Northern Kentucky (who won over 20 games each of their last 5 full seasons). After that 10-2 start, they went 6-14 the rest of the way to finish .500. Go figure.
Click to expand...

Just asking...how much of that team is still wearing the WIU colors?

gobirds85 said:
Just asking...how much of that team is still wearing the WIU colors?
Click to expand...

Not many and they upgraded talent. That’s why saying we lost to the 277 RPI team is dumb too. This could be an awful loss or not so bad. Nobody has a clue with all the roster turnover.
D

gobirds85 said:
Just asking...how much of that team is still wearing the WIU colors?
Click to expand...

BirdGrad2011 said:
Not many and they upgraded talent. That’s why saying we lost to the 277 RPI team is dumb too. This could be an awful loss or not so bad. Nobody has a clue with all the roster turnover.
Click to expand...

I might be a good or awful loss but I will say this about WIU the guards Rosner and Massner were really impressive. Massner had a triple double and he was the only player who lead is team in ppg, rpg and apg to return to the same school. Rosner was a D2 guard and he put in 25 almost shooting 50% from the field. WIU also only had 4 turnovers as a team which was pretty impressive.

So watched the go ahead 3 on ESPN+ again. WIU used Messner and their big guy to show screen on the ball (also a good shooter). Messner went under the big guy who screened the ball the other direction. Unfortunately, LIam and Poindexter both collapsed on the big guy who rolled to the basket while Kasubke, who was guarding the screener, switched to the ball handler. That left #2 wide open.

It seemed Mal was pointing and yelling at Liam to stay with #2 but it was too late.

It was a well drawn up play, I thought, and it caused confusion that left someone open as it was designed to do.

If I knew how to record it for video I would but my phone blocks it. Maybe I'll try via the TV later but that is after the screens happened.
H

ISU FAN 1 said:
Did they play The Horse, complete with flame throwing tubas?
Click to expand...